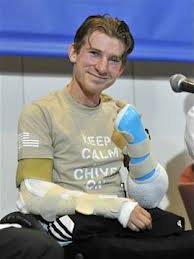 Last week the Johns Hopkins Hospital performed a double arm transplant on a quad amputee soldier. The team was led by Plastic Surgeon, W.P. Andrew Lee, M.D., professor and chairman of the Department of Plastic and Reconstructive Surgery at John’s Hopkins.

His team successfully transplanted two arms to Brendan Marrocco, 26, of Staten Island, who underwent the marathon surgery. Officials have said that Marrocco was the first service member from the wars in Iraq and Afghanistan to survive the loss of four limbs. He lost both legs above the knee, his left arm below the elbow and his right arm above the elbow when a military vehicle he was driving was struck by a powerful makeshift bomb on Easter in 2009.

In this case, the doctors used a new anti-rejection procedure. Marrocco received an infusion of bone marrow derived from vertebrae taken from the donor’s lower spine.

Lee said results in such cases have been good, although transplanted arms are never going to have 100 percent of the function of the limbs they replace. But he said patients have learned to tie shoes, use chopsticks and put their hair in ponytails.

Lee said there have been about 80 arms transplanted in about 60 patients so far around the world.

In a double transplant, all four arms must be carefully readied, with the skin peeled back and the bone ends often cut at angle, as a good carpenter might, to promote a solid connection, according to a textbook on transplantation Lee and his colleagues have prepared.

Inside the arms, individual muscle-tendon units, nerves and blood vessels are identified. They are then tagged with pieces of light blue sterile bandage that are sewn in place and labeled in permanent black marker to ensure proper connection.

The connecting sequence begins with the bones, which are joined with metal plates. “It’s not as easy as fixing a fracture,” Lee said, “because the two ends of the bone belong to different people.”

Next, he said, “we typically connect the muscles and tendons.”

After that, “we put together the blood vessels,” he said. “That’s the critical part, where we need to restore circulation to the transplanted limb by connecting the arteries and the veins. And they’re typically done under a microscope.”

Finally, the skin is sewn together.

Marrocco’s recovery will include a long process of occupational therapy, physical therapy, and medical therapy. This will be hard work, but in the end he and the doctors believe that it will be well worth it.

Plastic Surgeons have a long history in the field of transplantation surgery; indeed it was a plastic surgeon who “invented” the sub-specialty. The first successful human organ transplant was done by Plastic Surgeon Dr. Joseph Murray on December 23, 1954. He later won the Nobel Prize for his work in Immunology.

Best wishes to Brendan Marrocco for a speedy and full recovery.