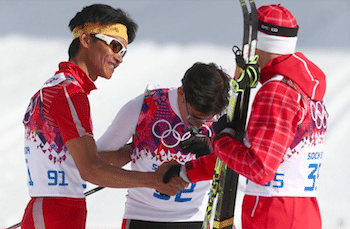 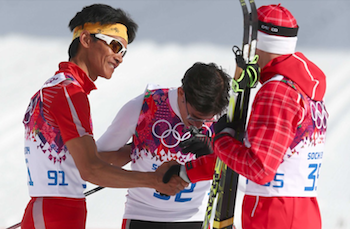 The Olympic Movement is supposed to be about competing at the highest level, but more importantly about determination and sportsmanship. Thankfully we were treated to another example of these tenets recognized by the crowd, the winner of the event, and indeed the world.

The event is the 15 Km Individual Cross Country Ski Race. It is a grueling event, where victory is often won or lost in fractions of second after traversing unforgiving terrain in snow and cold. Many athletes collapse in exhaustion after crossing the finish line.

On this day, Swiss cross-country skier Dario Cologna won a gold medal having just finished the grueling 39-minute, course with a close finish at the end. Winners will typically pick up and leave. But on this day, there was another Olympian still on the course, with a unique story.

The skier who finished in last place was 43-year-old Roberto Carcelen. He is Peru’s first Winter Olympian, and has only been skiing since 2005. He was also competing with broken ribs as the result of a training accident he sustained just two weeks before the Olympics. Fractured ribs are quite painful. It basically hurts with every breath. Now get your suit on, go out in the cold and cross country ski for 15 Km. Quite a feat.

As Carcelen struggled down the final stretch, he was greeted by a standing ovation from the fans and grabbed a Peruvian flag from the crowd.

He crossed the finish line, in 87th place, 28 minutes after the winner, and 11 minutes after the next finisher. Carcelen was first greeted by Dachhiri Sherpa of Nepal who finished 86th. Then, the winner of the event, Cologna went over and greeted both competitors with a handshake.

This is what it is supposed to be all about, camaraderie and recognition of exceptional effort, no matter the final time or place on the podium. Congratulations to all involved.