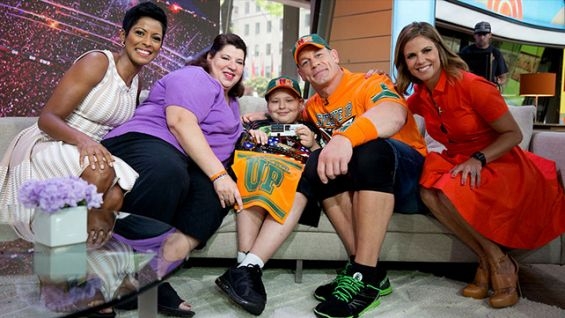 Our society looks up to athletes, especially those who have achieved great things like championships or records.  John Cena is a 16-time WWE Champion.  This is a significant achievement.  He may be more proud of the other record he holds, and the rest of the field isn’t even close.  He has granted his 500th Make-A-Wish request.

The Make-A-Wish program tries to grant wish requests for children diagnosed with a critical illness.  John Cena’s mantra of “Never Give Up” often resonates with what these children as they battle their disease.  John Cena has used his notoriety and celebrity to give a positive message to today’s youth.

“I’ll drop everything. If I can offer a fantastic experience, I’ll be first in line to do my part,” said Cena, making his trademarked catch phrase “Never give up” less of a slogan and more of a lifestyle.

The WWE has a long history with Make-A-Wish.  At the event lauding Cena’s accomplishment, the sports entertainment company made a $1 million commitment to Make-A-Wish.

John Cena says that he will continue granting wishes, despite his increased schedule in the ring and on screen.  Thank you to a true Champion who chooses to make a difference in the lives of sick children and their families.