Chavez Jr. vs. Martinez Wrap up 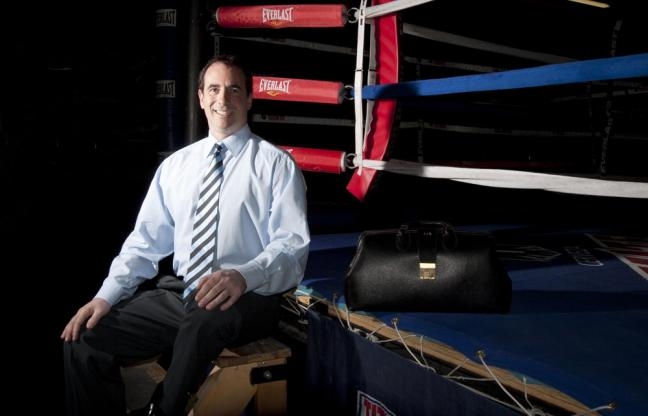 On September 15, 2012, Julio Caesar Chavez Jr. fought Sergio Martinez at the Thomas and Mack Center in Las Vegas, Nevada. The fight was billed as Chavez Jr.’s opportunity to test himself against his toughest opponent yet in order to finally step out of his father’s shadow and demonstrate his skill as a premier boxer. For Martinez the fight offered his best shot at getting his Championship belt back.

The fight illustrated many issues that warrant discussion.

The Fight:
For many of the early rounds Martinez used his  quick feet to frustrate Chavez Jr. Martinez was in constant motion with his hands down at his side for most of the contest,  taking pot-shots and landing 1-2 combinations on Chavez Jr. He then quickly got out of harm’s way, easily out-pointing and out-boxing Chavez Jr. In the 11th round there was a little more give and take. In in the 11th it was obvious that Martinez was going for the knockout in order to remove any doubt about his performance in the ring.

However, things changed in the 12th and final round. Both boxers offered good exchanges until Martinez was caught with a stunning right hand. Subsequent left hooks by Chavez Jr. sent Martinez to the canvas. Martinez got up quickly and kept coming forward. He was dancing less, a result of what we later learned to be torn ligaments in his right knee. This injury may have also contributed to the slip in the later part of the round. Martinez could have held Chavez Jr., but he took a different approach and continued to swing away at his opponent. The fans went wild with a deafening roar and were treated to a round that will surely be a contender for round of the year.

The round will have people talking for a long time, and of course was reminiscent of Chavez Sr.’s 12 round come-from-behind victory with 2 seconds remaining over Meldrick Taylor 22 years previously. Although this feat was not repeated, it gave the Chavez Jr. fans something to cheer about after 11 rounds of their man being beaten.  After the final bell Martinez had his championship belt back and Chavez Jr. had a happy fan base.

As most of you reading this article know, open scoring means the judges’ scores are revealed as the fight progresses. The thought is, if a fighter is hopelessly behind, the corner knows it and can stop the fight to save the fighter from more physical abuse. This can create controversy  because of the unique nature of boxing: a fighter can be losing the entire fight  but in the last moments of the last round win by knocking out his opponent.

Here is a breakdown of the punch counts:

This includes that Chavez Jr. had a 37 to 8 edge in power punches landed in round 12. Chavez Jr. noted that he “started late,” and that the counts would therefore be different. Chavez Jr. looked befuddled most of the time. Hall of fame trainer Freddie Roach almost stopped the fight. If this was a fight where open scoring was used, he may have been even more apt to do that. True to his heritage, most Mexican fighters just don’t mind dying in the ring, Chavez Jr. kept going and treated us to a thrilling 12th round.

This fight may make for quite a case against the use of open scoring in boxing.

12 vs. 15 Championship Rounds:
Would there have been a different outcome if Chavez Jr. had three more rounds? Possibly, especially since Martinez broke his  left hand along with his injured right leg. Martinez was way up on the scorecards so Chavez would have needed to go for the knockout.

Almost everybody in boxing agrees that 15 round contests are not coming back. Tommy “Hitman” Hearns and I chatted about this at the fight, and his opinion is that a lot of guys got hurt in the later rounds and that it was a good thing that they changed it. Ray “Boom-Boom” Mancini loved the longer fights, and believes that 15 rounds is appropriate distance for championships. I think that even he knows that they won’t be coming back anytime soon.

Chavez Jr. Training Regimen:
Chavez Jr. has been taking some heat over his less than focused training regimen documented on HBO’s 24/7 series. This coupled with a previous DUI while training for a fight and the finding that he tested positive for Marijuana after the fight has called into question his dedication and focus to the Sweet Science. These issues, especially in light of his father’s well documented bouts with substance abuse, have raised some clouds over the future of the young Chavez. He has issued an apology to his fans, and he awaits the discipline from the Nevada State Athletic Commission. It is hoped that this may be the “wake up call” (much like the bell of the 12th round) for him to focus and fulfill his potential.

Boxing is Dead…Yeah, Right.
Las Vegas, Nevada hosted two big Championship Fights on the same night, at the same time, two miles away from each other. The Golden Boy/Showtime fight reported ticket sales of 12,860. The TopRank/DibellaEntertainment/HBO fight reported ticket sales of 19,939. The attendance was 19,186. This is the largest crowd that the Thomas and Mack Center has ever had for a boxing match. This does not count closed circuit at the hotels in Las Vegas. I think it is fair to say that boxing is alive and well.

All in all it was a great weekend of boxing. Anything can happen in the ring. Like any good contest, there are always themes and issues under the surface that are fun to explore from time to time. I always look forward to seeing great boxing and always hope none of the fighters will need the assistance of a plastic surgeon folowing the fight.