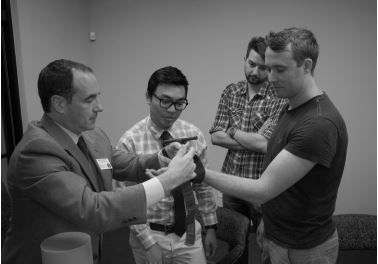 After the infamous Libby Zion case, there was a movement to limit medical resident work hours. At that time, our General Surgery program had us doing in-house call 3 days a week, and typically working upwards of 120 hours a week. Our older attending physicians thought we were soft, as they used to be in-house every other night. There was an old joke about that as well; the Resident would complain to the old surgery chairman, and he would exclaim, “Why are you complaining, you are missing half the pathology?!” While amusing, there is a hint of truth to this statement. Clinical medical and surgical training is an apprenticeship. There is a didactic element, but most of the learning comes from hands-on experience. This is especially important with diseases that may not always present in a straightforward manner (i.e.; the acute abdomen, syphilis, etc.). It is also important if there is a specialized skill set, where proficiency is directly related to repetition such as invasive procedures or surgery. Experience presents the most difficult thing to teach young residents: judgement.

The movement to reduced work hours highlighted many aspects of our medical education system. The hospitals received money from the government for residents and interns. These trainees did the work of three full time employees, and were also generally powerless to do anything about less than adequate conditions in certain hospitals. There was a brief discussion of having the United States model look more like the system in the United Kingdom, where there the hours were the same but spread over a longer period. The government did not want to fund extra years of training, so what was adopted were various regulations about not working more than 80 hours in a week, leaving the hospital after an overnight shift, and others. Often the residents themselves did not like these rules because they may have worked a patient up, have seen them and their family multiple times, and the patient was going to the operating room, but now, because of the rules, that resident may not be able to see the disease process that they have been studying. The patients often did not like care that was more fractured, as the residents often spent more time with the patients, and were perceives as, “their doctor,” even more than so than the attending. One of my most unfavorite praises to hear as a resident when I call about a patient was, “I don’t really know the patient, I’m just covering”. This became more commonplace as the day shift signed out to the “Night Shift Blue, (or Red, or whatever), Team.” The rules continued to be in place, and we started to see unintended consequences.

Multiple studies have shown that these restrictions have had a detrimental effect on medical training. Resident well-being has been unchanged or only somewhat improved. Board scores have not improved — in fact they have mostly decreased. There has been a significant decrease in educational proficiency. The impact of these rules is far reaching; it is estimated that the graduating general surgery resident is missing 1,000 cases from previous graduating trainees. This is a large amount of cases, especially when considering that most patients seen do not go to the operating room. This lack of experience is having palpable results.

Many graduating general surgeons do not feel ready to operate independently. This, after five clinical years (and usually additional research years), of training. Many surgery chairmen find the surgeons reporting for their sub-specialty fellowship do not have the necessary skills. This is such a significant problem, that some institutions are offering an experience year program — this is not a fellowship that leads to a certificate, it is a year spent acquiring enough cases to be competent. This is an example of well-intentioned people impacting in areas outside of their area of expertise.

We can now look back on this as a failed experiment, and there are now studies going on about reintroducing hours back into the training program.

Medical and surgical training is hard. It is supposed to be. One needs to know how to function and make critical decisions even when deprived of basic necessities (sleep, food, etc.). This is not a rite of passage to enter the medical fraternity; what is needed is not just the addition of hours back, but the addition of appropriate experience. As a resident, if someone told me that I could just operate for 100 hours a week, I would be thrilled. It was all the other work that went with it that was less palatable. The tasks of rounds, evaluating patients, and reading the X-rays are important. The menial tasks of drawing blood in the middle of the night, wheeling your patient to radiology, and the redundant paperwork (now made worse by the Electronic Health Record), are those things that should be eliminated.

We need to get back to the basics of the patient and the physician. It is there, guided by their fellow residents and attendings, where the trainee garners the experience to become the doctor they set out to be. We can all remember individual patients, or instances that continue to impact our practice and ourselves to this day. It is upon us in the medical profession to make that happen for them, so that they may have the appropriate experience in the appropriate educational environment. That would be the balance that would help us all.