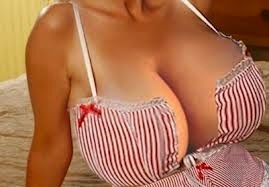 Recent stories note  women with extremely large breasts smothering their boyfriends with criminal implications. It seems that these incidences have arisen before, and it’s possible they could happen again in the future!

Franziska Hansen, 33, is reportedly Charged with “attempted murder with a weapon” after her attorney boyfriend, Tim Schmidt, claimed she tried to smother him with her breasts. She denies the charge, saying it was a sex game and the boyfriend knew all about it.

He told a German court that the couple had been having sex in May of this year when Ms. Hansen suddenly grabbed his head and pushed it between her breasts with all her force.

Mr. Schmidt stated, “I couldn’t breathe any more, I must have turned blue. I couldn’t tear myself free and I thought I was going to die.” He claims he managed to wriggle free and fled naked to a neighbor, who then called police.

Mr. Schmidt told the court that the couple’s four-year relationship had been strained after they moved to the town of Unna, where his career as a lawyer took off and she struggled to hold a job. Mr. Schmidt said his girlfriend tried to kill him after she discovered he was planning to leave her.

He reportedly told the court: “It is clear she wanted to kill me. She even admitted it to me on the telephone. “I asked her why she wanted to smother me to death with her breasts and she told me: ‘I wanted your death to be as pleasurable as possible.’”

Donna Lange, 51, is reported to have thrown herself down on top of her boyfriend and smothered him with her breasts. Witnesses say they heard the 5’ 7” man, who shared the mobile home with 5’ 6” Lange, pleading with her to get off of him. One witness stated, “she had her chest on his face – she smothered him to death.”

Police arrived at the scene following reports of shouting coming from inside the mobile home and found Lange lying on top of her boyfriend, 51, (who weighed 14 lbs less than her). Doctors tried to save him but he was pronounced dead on arrival at Washington Swedish Medical Center. Reportedly, a policeman photographed what appeared to hair the same color as Lange’s, clutched in the victim’s hand.

Lange, who was heavily intoxicated and received facial injuries during the disturbance, told police she had no idea how the man had died.

Police said that in addition to the victim, a man and three women were at the scene, all who were heavily intoxicated.

Third story: In 2010, A U.K. mother of three, Claire Smedley, from Blackpool, U.K., nearly smothered her boyfriend Steven with her 40LL breasts during sex

Steven usually enjoys this activity, however, this time she misread his flailing for excitement, as he was actually suffocating. After a few minutes, she noticed he had stopped moving and appeared to not be breathing.

She was about to call for help when a Steven finally regained consciousness. He later stated that he thought he was going to die, “I did think my time had come,”

The couple broke up after the incident.

As a Board Certified Plastic Surgeon in Las Vegas, I am often called upon to perform breast augmentations. My practice hopes that nothing untoward ever happens to our patients and those they love.

Be careful out there.